As of March 29th, fans of Billie Eilish can download her new single “Bad Guy” and bop along to Eilish’s creepy/catchy tune to their hearts’ content. As of today, April 9th, Eilish’s new single has probably already worked itself into digital music storage devices all over the world.

I mention Ms. Eilish’s new single and today’s date because the two are related through a complex web of names, dates, and innovations. She may not know it, but Billie Eilish owes much of her success to a revolutionary device patented over 160 years ago. The device was the phonautograph, and, though its legacy was unknown until 2008, research all but proves that its inventor Édouard-Léon Scott de Martinville was the first person to successfully record a human voice, presumably his own, on April 9th, 1860.

In the interest of cross-temporal comparison, then, I’m going to compare Martinville’s “Au claire de la lune,” the oldest known recording of a human voice, to Eilish’s “Bad Guy,” one of the newest recordings of a human voice. 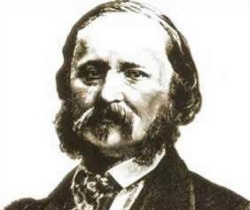 Martinville’s recording of “Au clair de la lune” possesses that retro-scratchy sound all the DJs are going for right now. Martinville’s reedy voice barely comes through on the 20-second recording but the audio fidelity has never been clearer, since sound engineers slowed the recording down to its original speed back in 2009, having initially thought that the recording was of a young girl — possibly a time-traveling Billie Eilish.

With no music video to speak of, while listening to “Au clair de la lune,” Martinville fans have the option of staring at a portrait of the great innovator who may or may not be a time-traveling David Crosby.

Eilish’s misanthropic post-new-wave-feminist pop-trap sound agglomeration features a trembly robotic voice effect, driving catchy rhythms, and a lyrical attack that will offend your Boomer grandad’s sensibilities. I don’t know how many people used to shake their rumps to “Au clair de la lune,” but I bet whomever did was doing so with less frequency than Eilish’s listeners.

The music video adds a creepiness to the song that I might not have picked up on with the robot voice alone, but Eilish looks less like David Crosby than Martinville so viewers should prepare themselves mentally.